The original site of Trinity Collinsville was near the intersection of Maple Avenue and River Road, main roads through town. As Collinsville is in a river valley, the topography is very hilly. The original property was a thin strip of level land at the foot of a steep hill that offered no viable opportunity for expansion as the parish’s membership grew.

There was no parking lot at the original site; cars parked on one side of the narrow Maple Ave. during Sunday services. The properties that were used for Sunday School and the Parish Hall were not necessarily adjacent and there were no sidewalks, so children had to migrate to the Sunday School via the road. Parishioners felt this situation was untenable enough that they embarked on a fundraising campaign to move the church to its current site on River Road, 1 1/2 miles from the original site. This idea was not originally supported by the diocese, but the task was completed in August 1965. 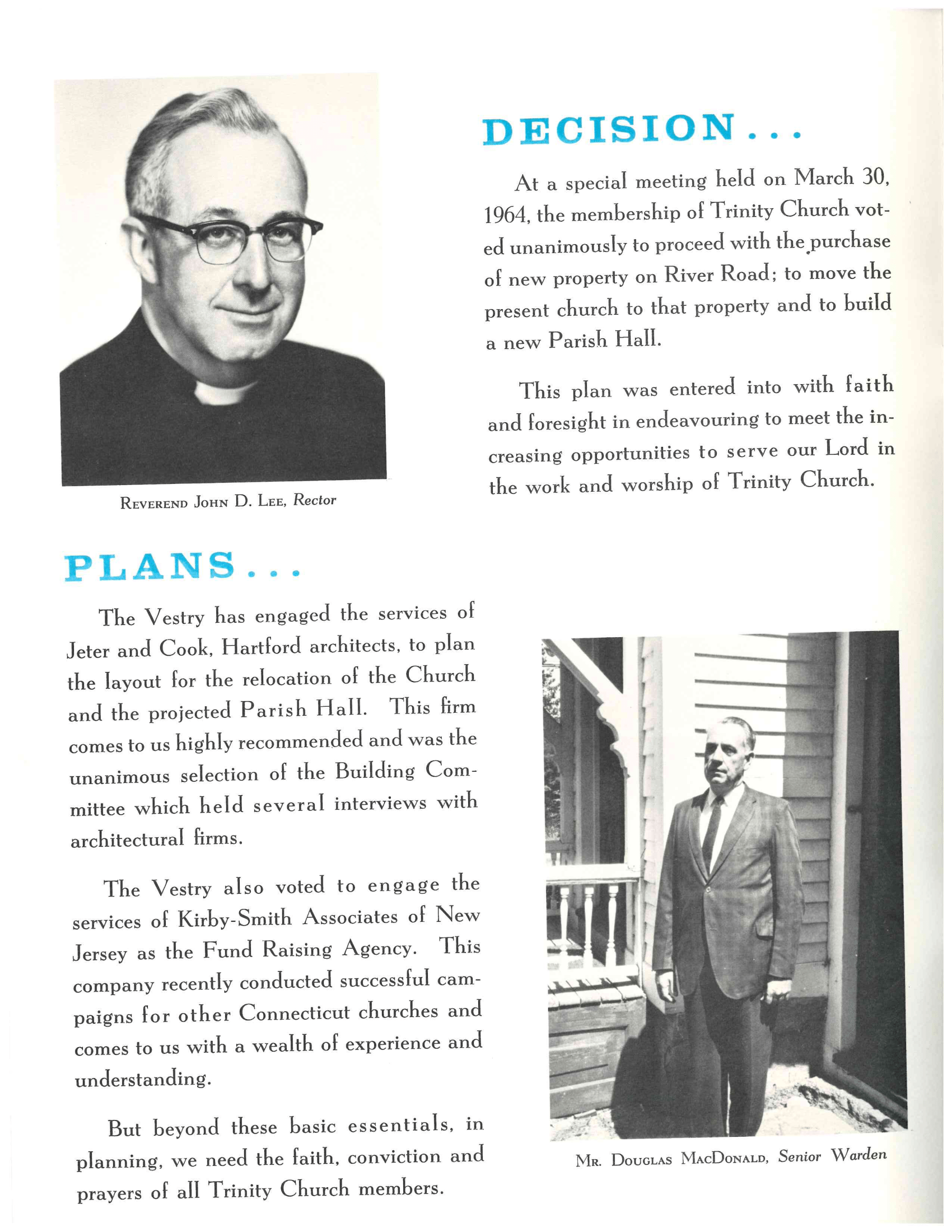 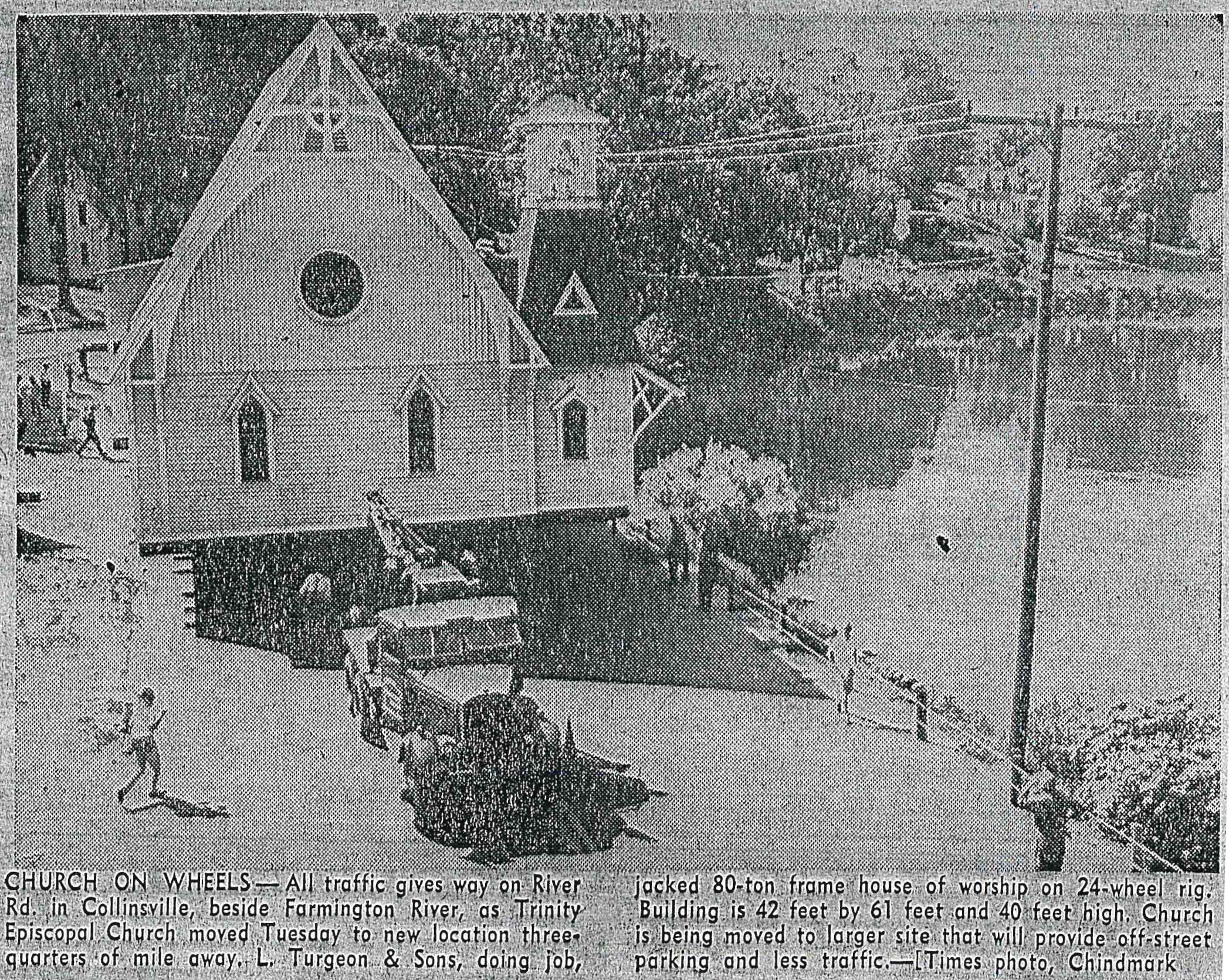 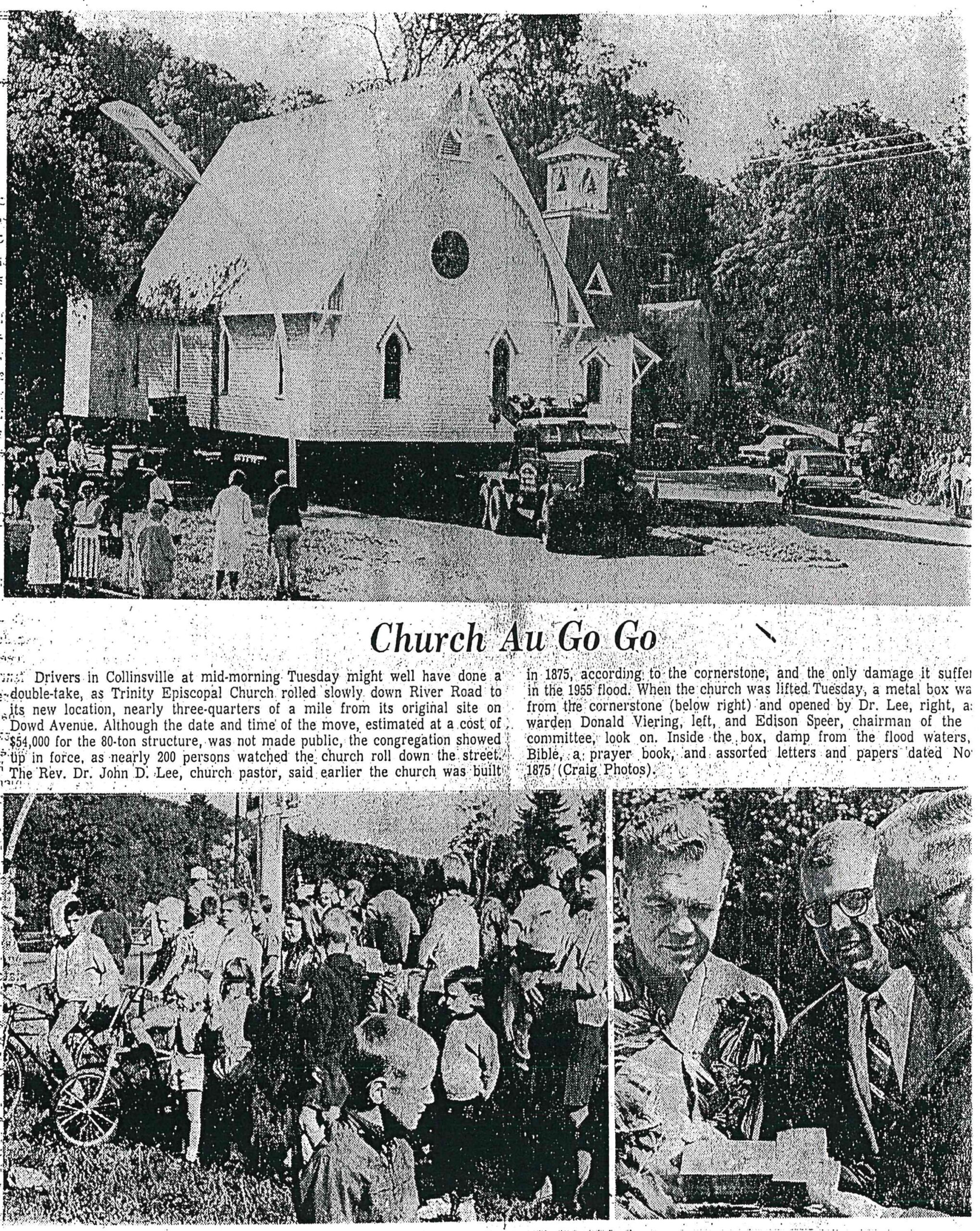 Trinity Tomorrow Today was a capital capaign whose goal was to add much-needed space to the church, make a more fitting main entrance to the church, and to add an elevator to make the space wheelchair-accessible. Planning began in 1988, construction commenced in 1990 and was finished in 1991. 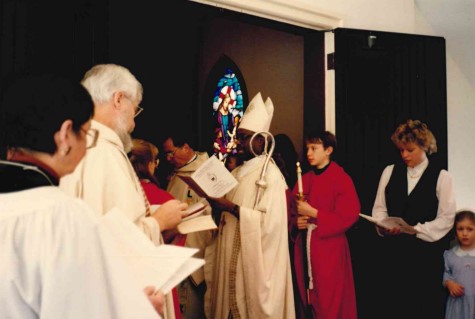 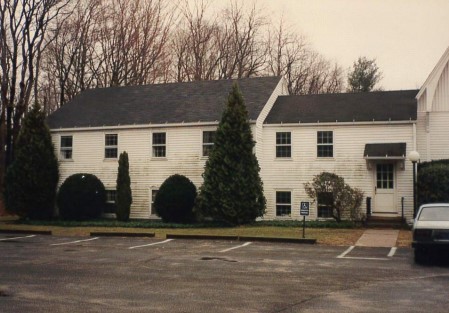 To the left, the building ended at the end of the current parish hall. In the middle, the entrance was unassuming. 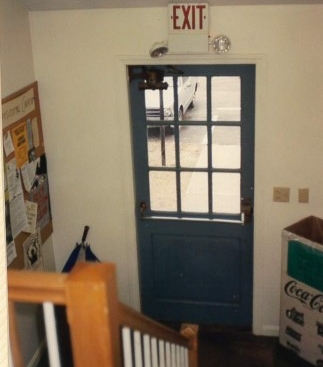 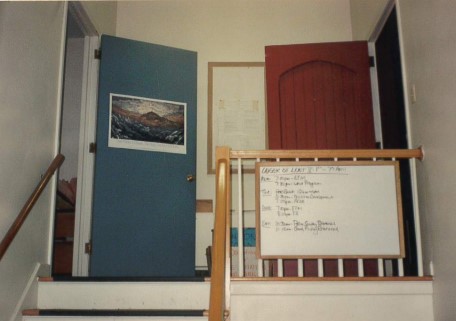 At the top of the stairs, the offices were to the left and the sanctuary to the right. 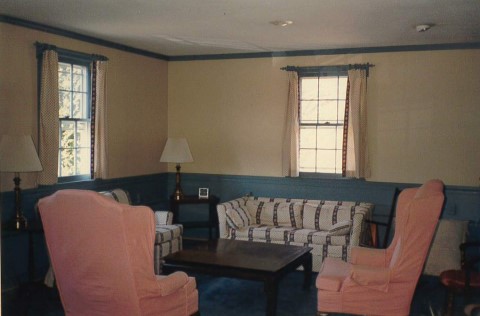 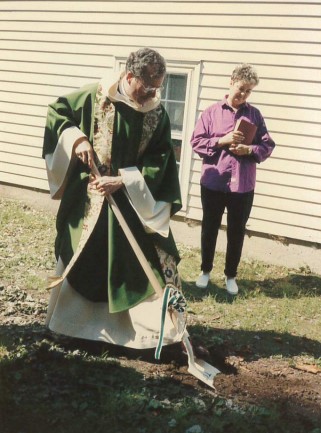 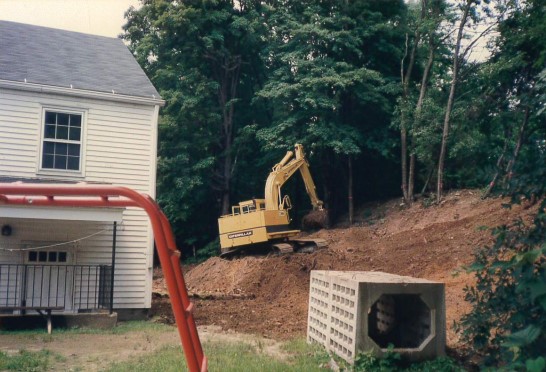 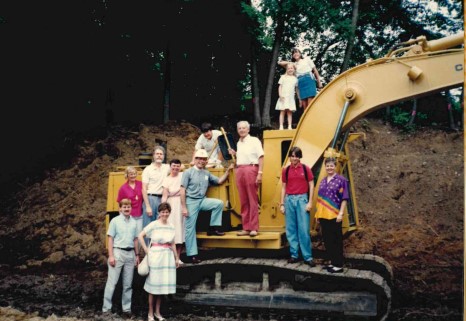 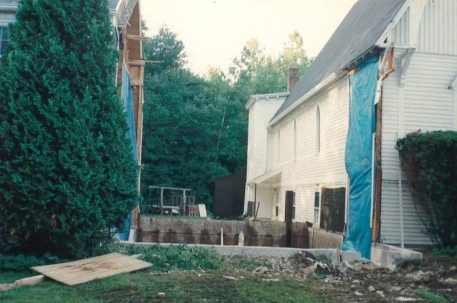 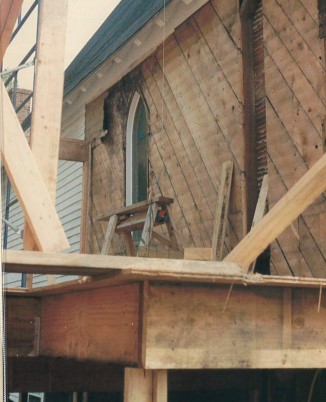 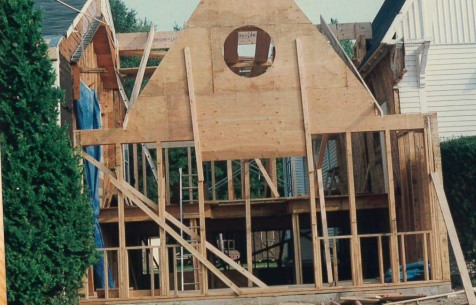 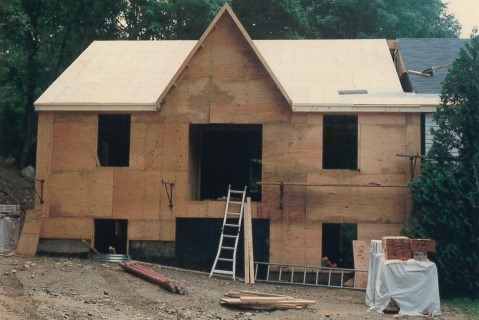 Classroom addition progress. Each new addition adds a peak to the roofline. 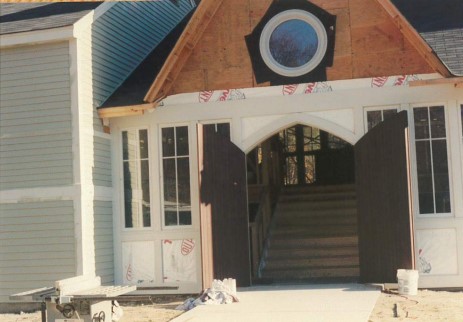 The new main entrance doors are hung and stained, painting of new church colors in progress. 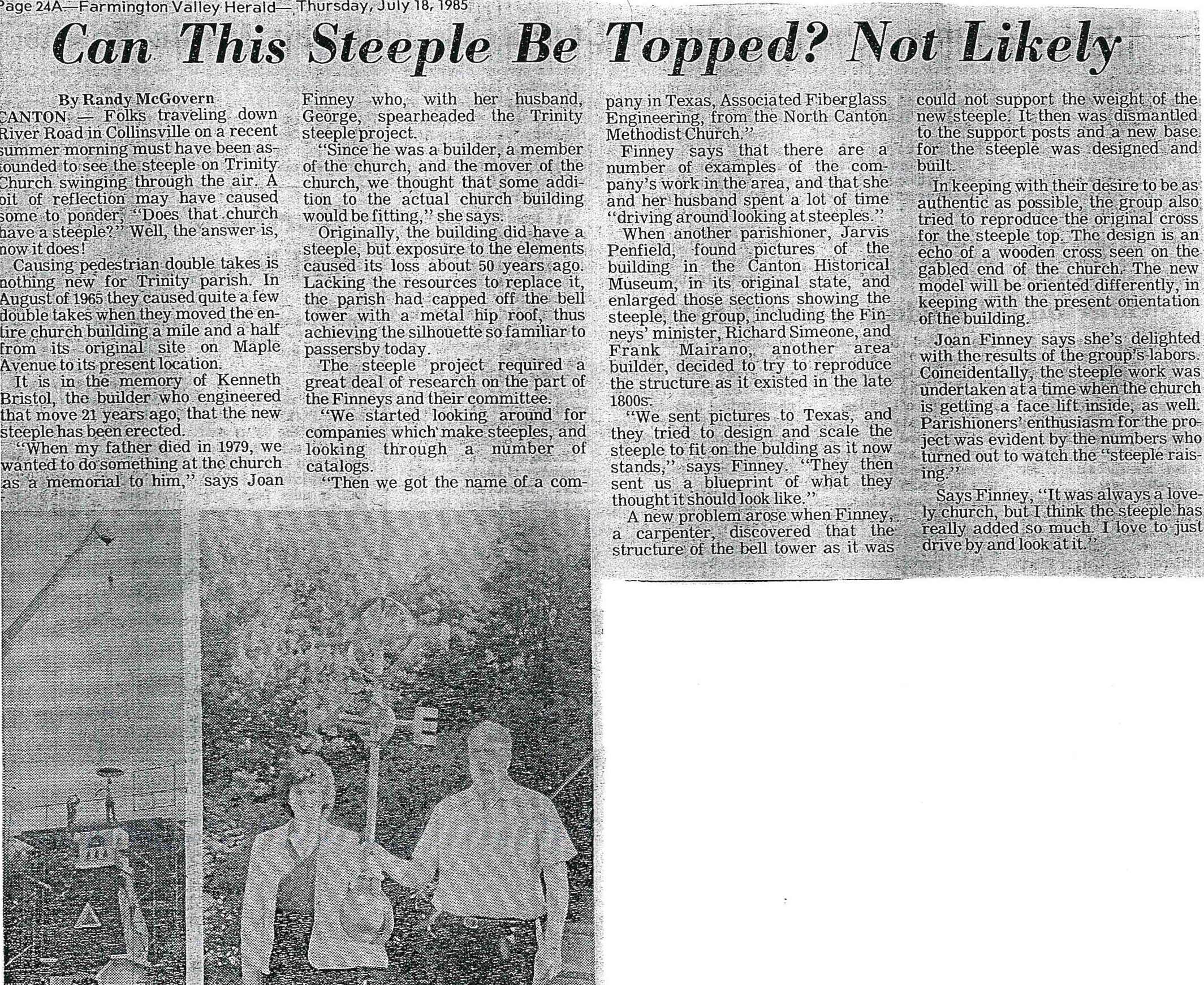 You might assume a rector’s position to be one of longevity. However, the narrative of a church leader holding their community through a decade or more is a rare occurance, at least in Trinity Collinsville’s history. The profession proves to be as transient as any other occupation, as this record of our past rectors illustrates.

Clergy of Trinity – an Historical Record

1854: Rev. J.H. Betts (of Pine Meadow) and Rev. Samuel Benedict (a tutor at Trinity College) conducted the first Episcopal services in this village in a storeroom on January 29, 1854. Three people were present at the service. Rev. Benedict continued to officiate for one year, making use ofthe Collins Company Hall.

1854-1870: Missionary priests from the older, surrounding parishes of Farmington and New Hartford (among others) sustain the Episcopal presence in Collinsville.

1870-1873: Rev. E. R. Brown of Christ Church, Unionville, organized the Mission with two communicants. The Trinity Episcopal Society was formed in 1870 with 9 members.

1875-1876: Geo F Breed. May 3, 1875, Trinity Collinsville was incorporated under state law. The Parish was received into the Diocese on June 8, 1875 and the corner stone of the Church laid on November 11, 1875. The Church was built by gifts from the Congregation on the lot on Maple Avenue, the gift of Mr. John E. Wheelock, Mr. Robert W. Hill being the architect. The first service in the Church was held May 14, 1876 at 3 p.m., at which time 8 persons were confirmed.

1884-1885: J. A. Ticknor. The church was consecrated by Bishop Williams, the last debt of $1000 having been liquidated, as no Episcopal Church can be consecrated until it is free from debt. Rev. Ticknor was ordained to the priesthood during his time here.

1885-1887: Samuel Hall. The baptismal font was dedicated during his time here. The interior of the church was decorated.

1894-1896: K. Huske. New carpet was laid, a hymnboard installed, and new vases and an altar bookrest were also installed. The pews were fixed and varnished.

1896-1902: W. T. Cavell. A quote: “United in thought, word and deed were all the people during this period. I enter this fact so that it may go down in the Hallways of Time as my testimony thereof.”

February 25, 1905: Rt. Rev. Chauncy Bunce Brewster, Bishop of CT, blessed the new Rectory, erected on Thayer Avenue and made possible by a bequest of $3603.76 from Miss Helena Rowens Case. Up to this time from the small beginning in 1885 the sum of $900 had been gathered, through gifts of Parishioners and friends.

1903-1906: F. P. Swezey During his term the church was repaired and redecorated, including a new roof, hardwood floor, and new chamber for the organ.

1912-1914: Frederick E. Buck. In 1913 he accepted a bequest from the Robinson Estate of the Robinson family home, which was situated near the church and was used as a rectory. 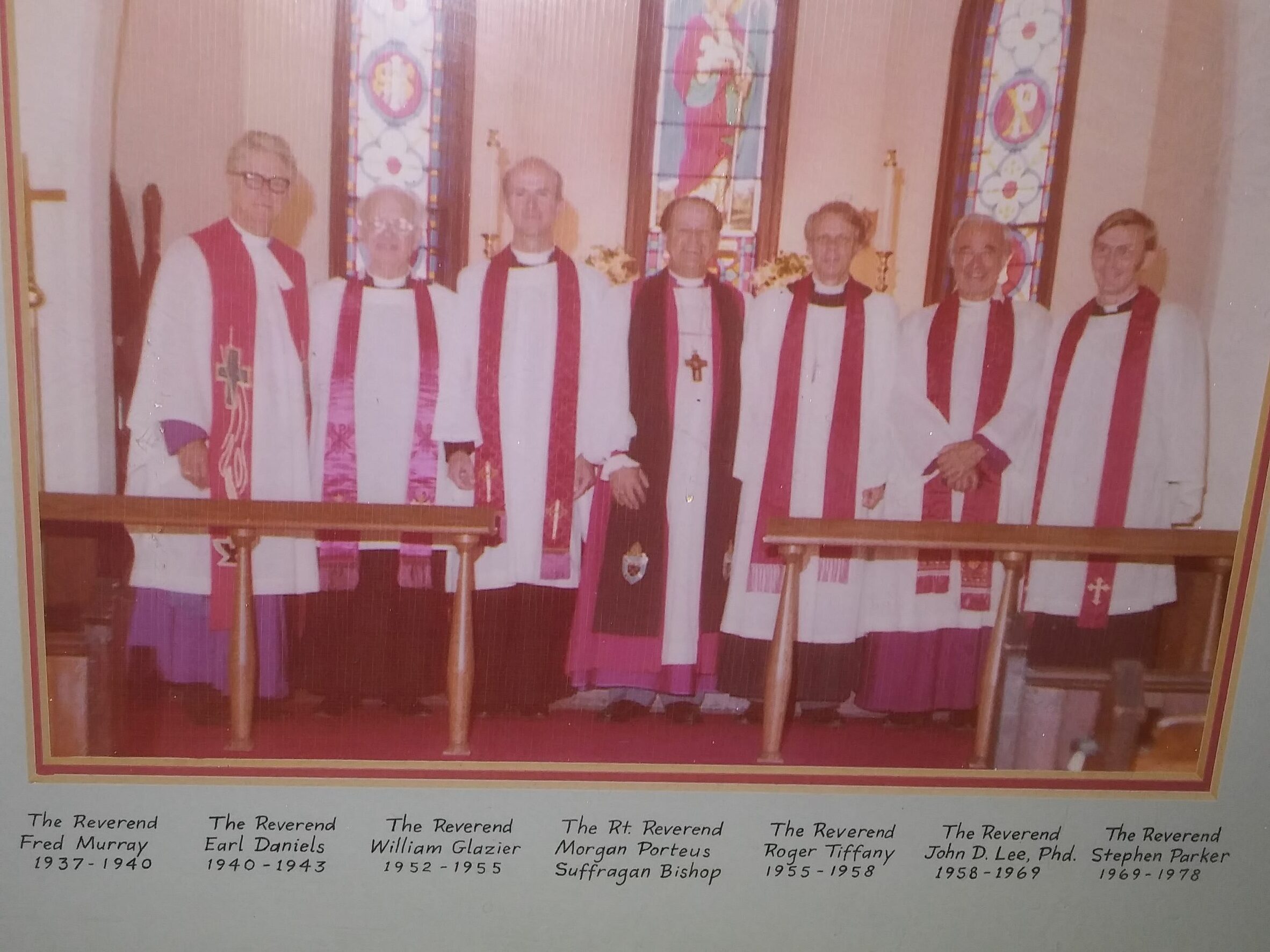 1928-1937: W. H. Mayers came from the Diocese of South Carolina to be Rector. He was also Instructor of Greek at the Taft School in Watertown. During his stay, extensive repairs were made at the Church and Rectory. Stained glass windows were releaded. Between 1930-1937, the Rector served both Trinity and Saint John’s in Pine Meadow.

1937-1940: Rev. Frederic R. Murray came as Deacon in charge. He was ordained while with Trinity and the church showed “splendid growth.”

1940-1943: Rev. Earl Daniels. During his time here the church’s debt was liquidated and the mortgage note burned. New memorial lamps were hung in the church and the interior was repainted.

1945-1952: Rev. William Stocks arrived from the Diocese of Toronto. Achievements during his time with Trinity included the painting of the exterior of the church and installation of a new oil burning heater at a cost of $1300. The church cellar was retiled and the 75th anniversary of the parish was observed. Since 1945, 29 new families were added to the Parish. The Church School increased to over 60 pupils and teachers, making apparent the need for more space. A goal was made to build a new parish house.

1969-1978: Rev. Stephen Parker was the rector during Trinity Collinsville’s centennial celebration, which was one year before the U.S. bicentennial.

1978-1996: Rev. R. Simeone was rector during the Trinity Tomorrow Today campaign that provided extensive renovations and and addition to the church. He left to become rector of St. John’s in Gloucester, MA.

2000-2004: Marian Stinson, Priest-in-Charge, increased our faith and commitment to outreach by convincing the parish to give away all of the proceeds of the Quality Street Fair. Prior to that, it was a fundraiser to help meet Trinity’s annual budget.

2004-2019: The Rev. Linda M. Spiers became Trinity Collinsville’s shepherd in 2004. She fostered a thriving church community. You can read more about her on our history timeline.

2019-2021: The Rev. Carrie Combs’ efforts were severely hampered by the arrival of the COVID pandemic. She kept the proverbial ship afloat during a very tough time. 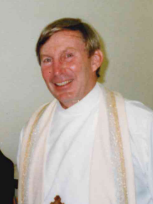 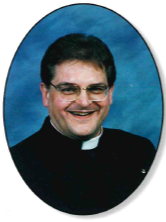 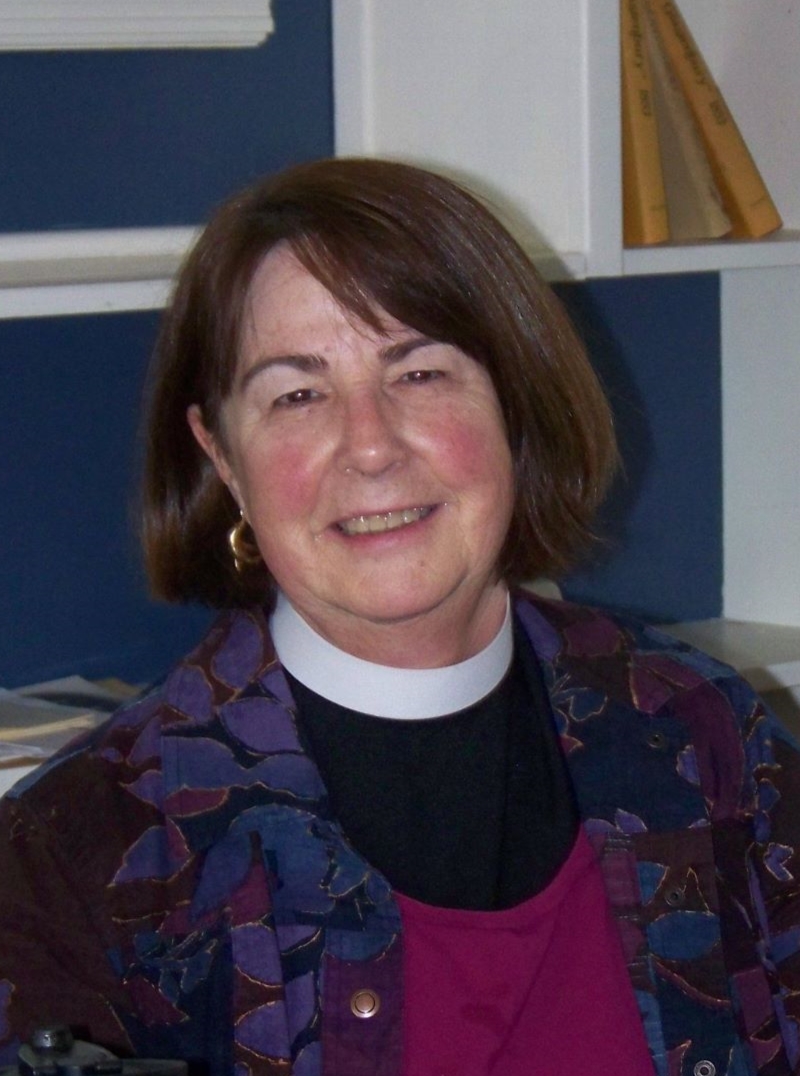 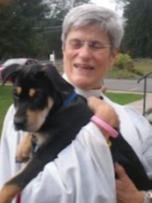 Exerpt from Centennial Vignettes: 1875 – 1975, researched and prepared by Eleanor Tallmadge

More about the Old Organ 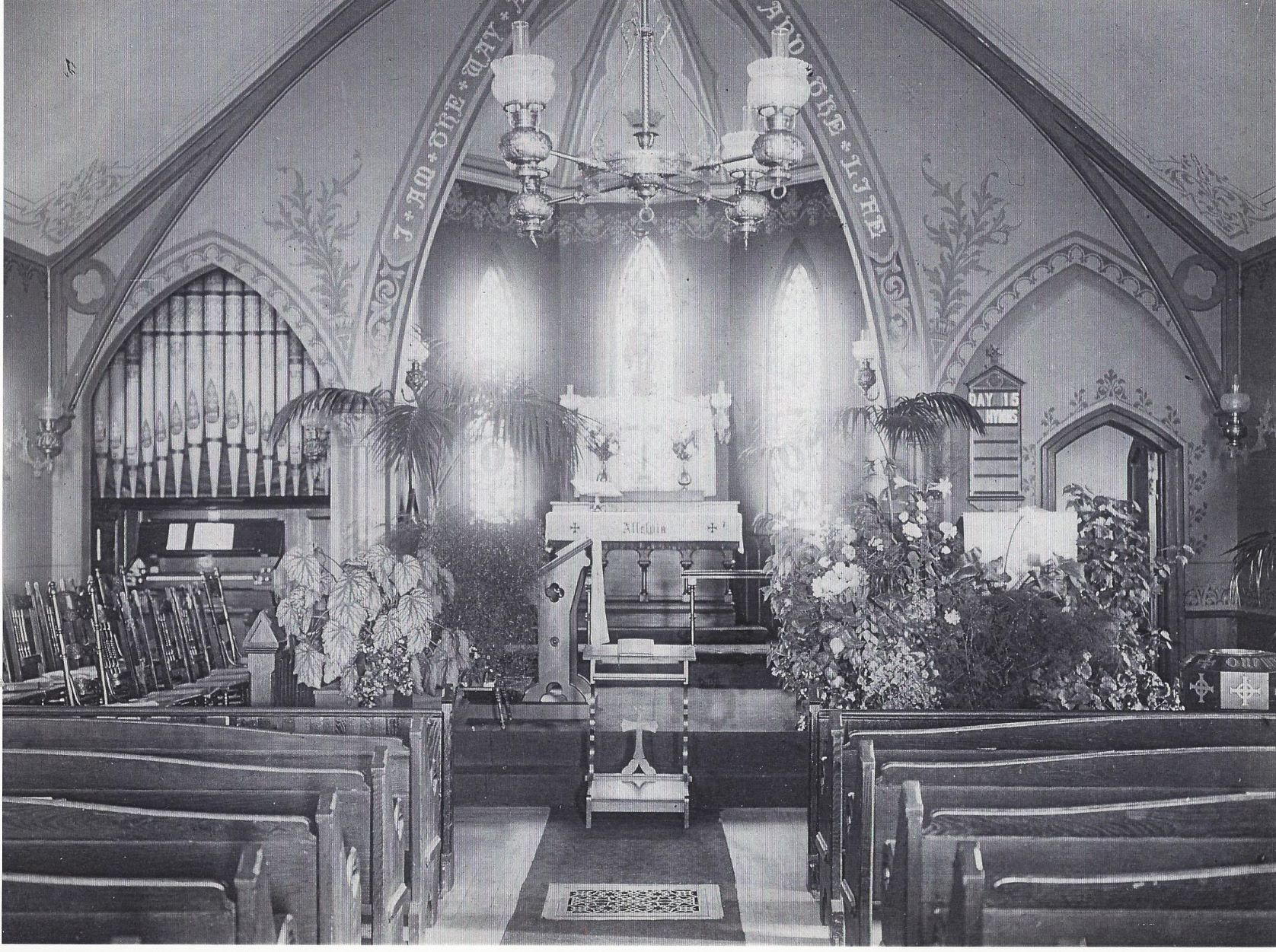 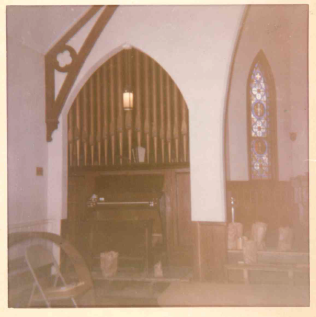 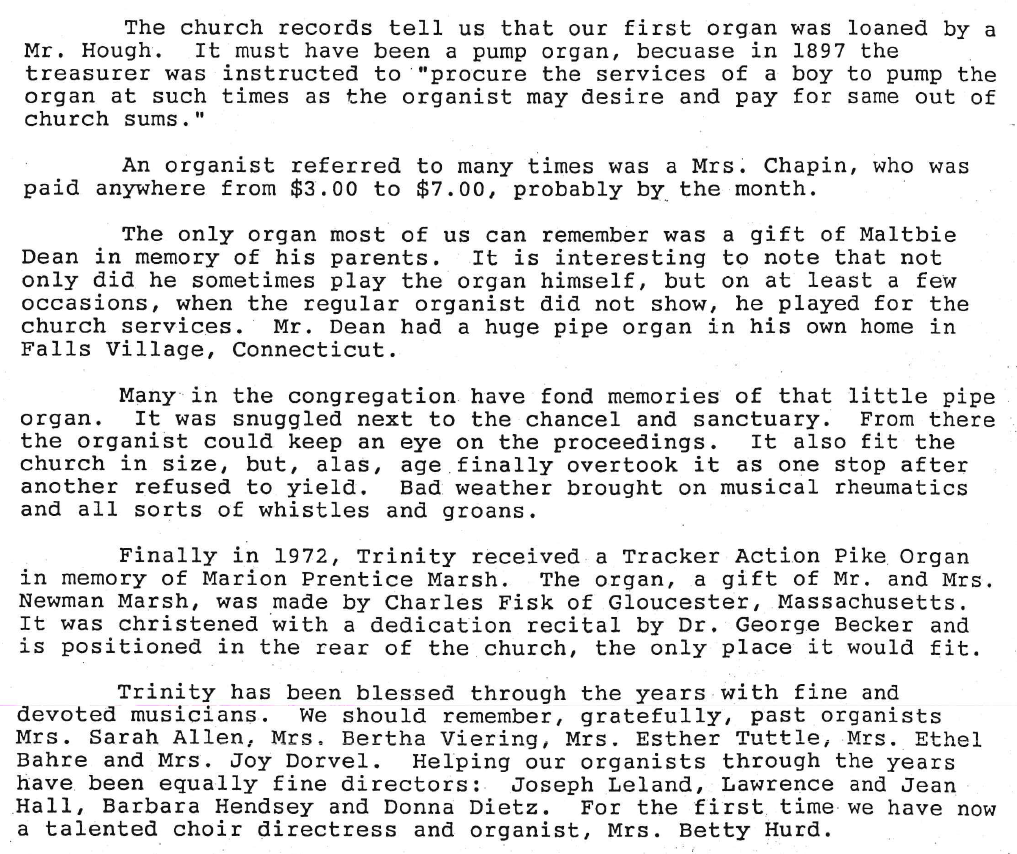 Exerpt from Centennial Vignettes: 1875 – 1975, researched and prepared by Eleanor Tallmadge

A booklet entitled Centennial  Vignettes: 1875 – 1975 was researched and prepared by parishioner Eleanor Tallmadge, who clearly had a gift for painting a colorful picture of the parish’s life. Her descriptions here and above impart her love for and familiarity with Trinity Collinsville. 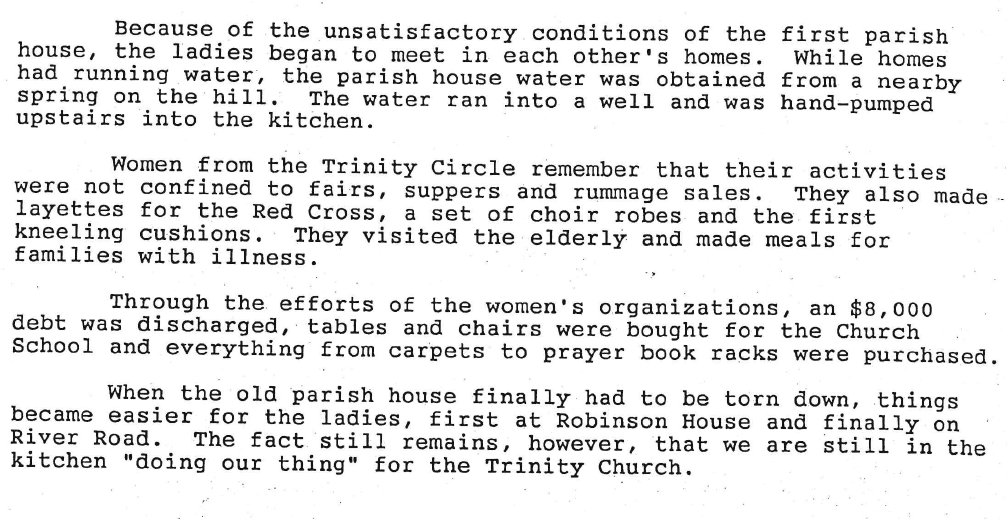 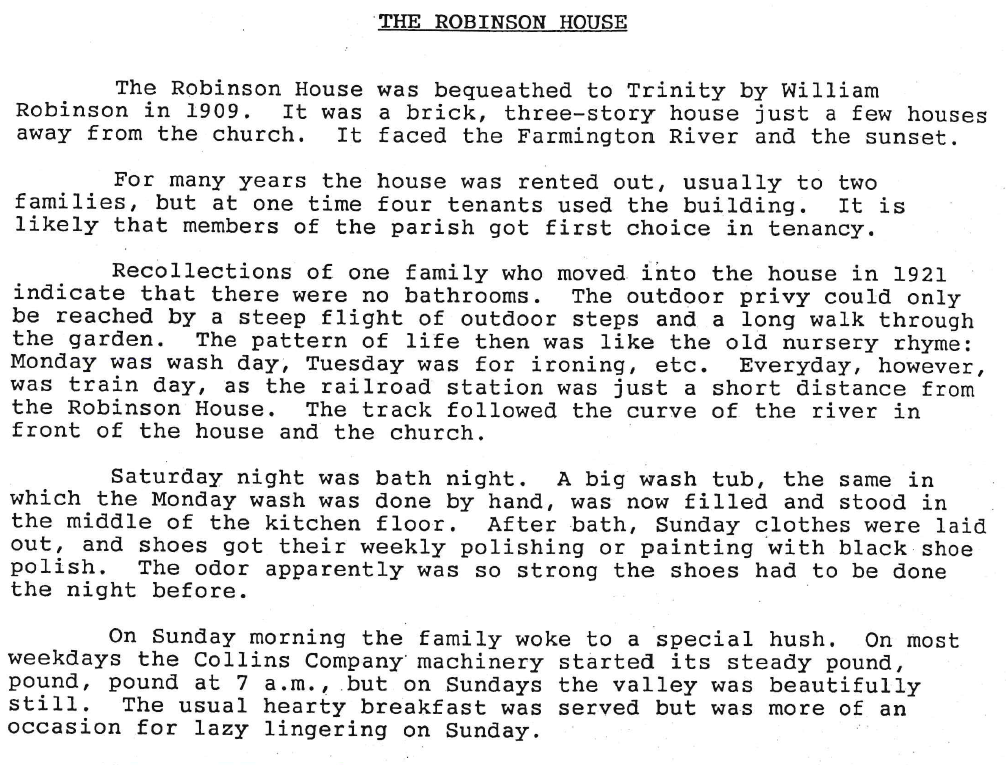 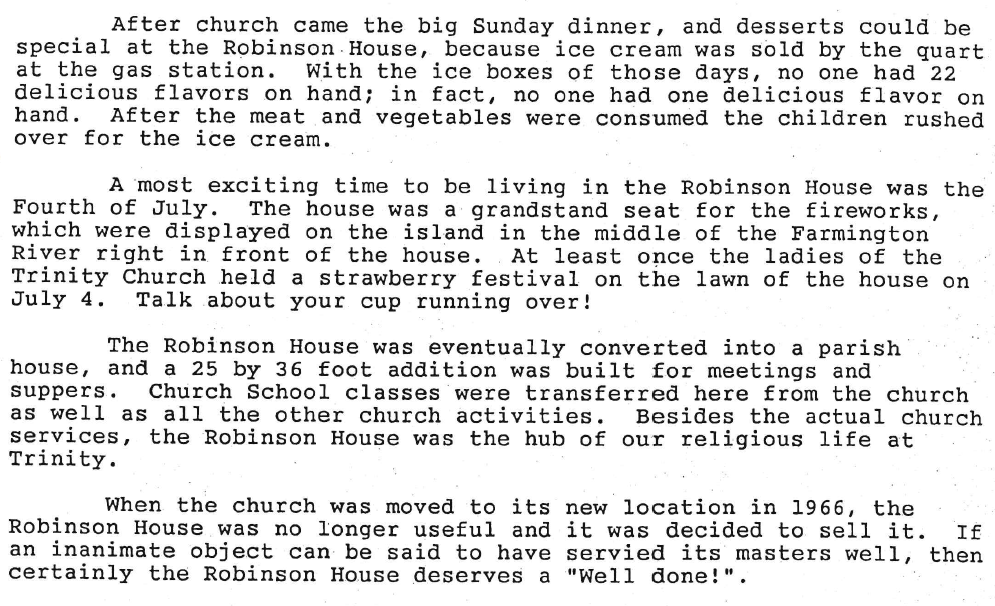