In 2008 a book entitled The Windows of Trinity Episcopal Church was created by Judy & Jim Devlin, Donna & Jack Faunce, and Richard J. Simeone, AHC, with photography by Rick Richardson. The descriptions and information contained here and on the Parish History page of the website are largely sourced from their work. 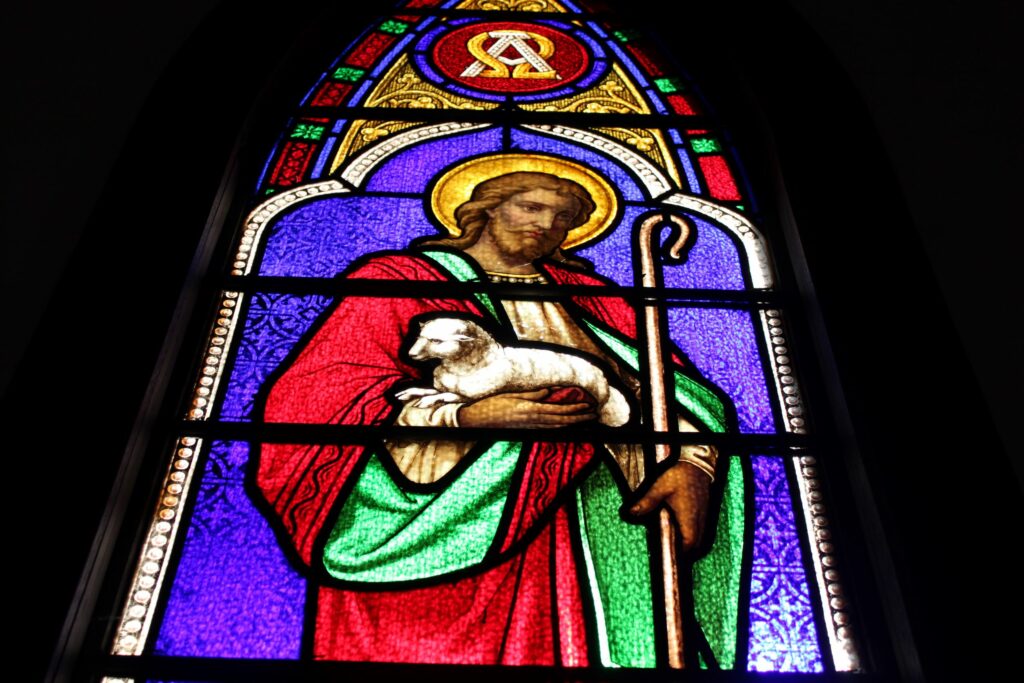 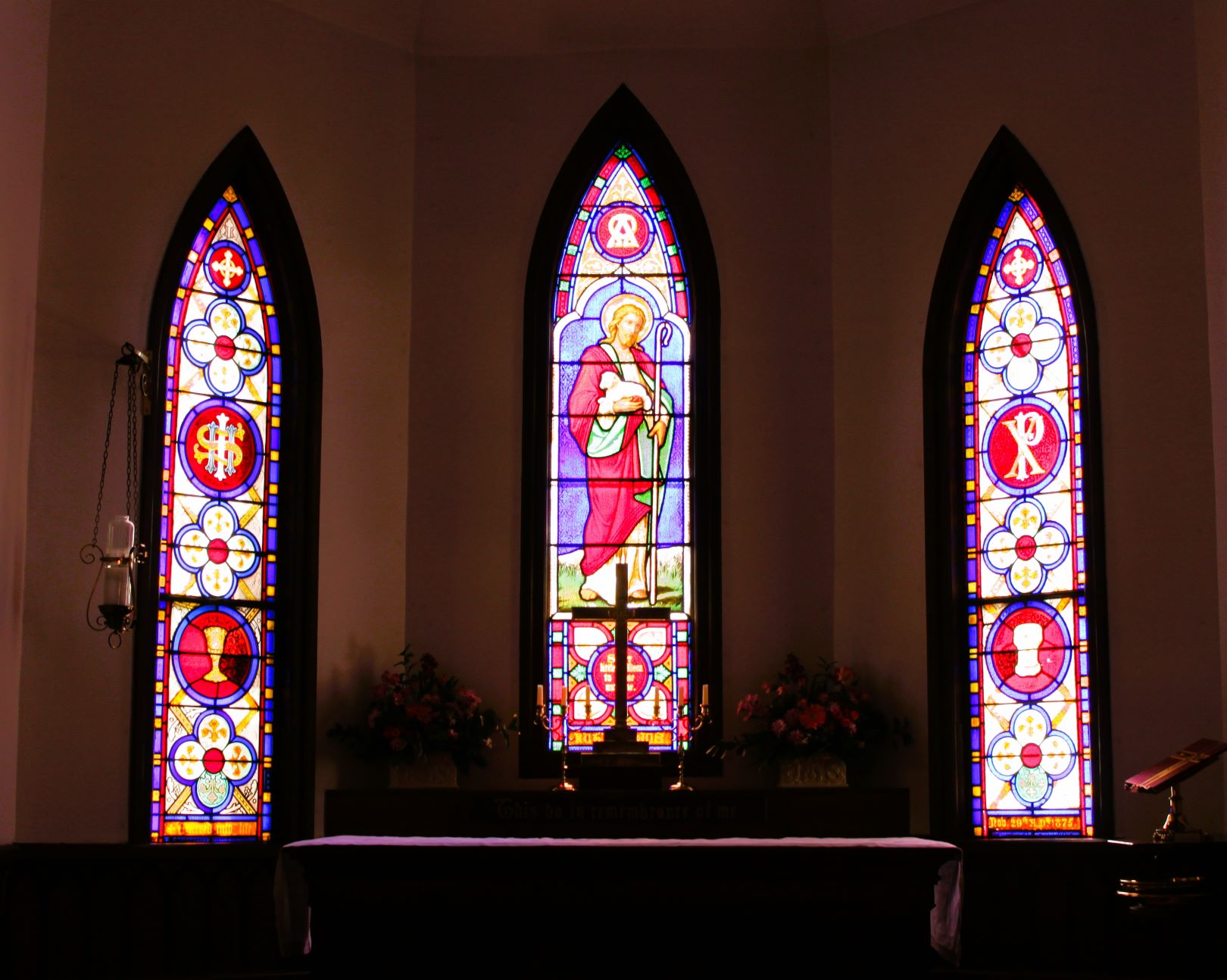 The Apse windows were given by the Rev. H.A. Dows (Rector from 1873-1874) in memory of his daughter, Ruth Dows.  Unfortunately, no further information about his daughter was found.

The central window depicts Jesus as the Good Shepherd, one of the most popular metaphors used to describe him. At the base of the window is the quote, “Suffer little children to come to me,” under which Ruth Dows’ name appears. At the top of the window, in a circle, are the entwined Greek letters Alpha and Omega, signifying God as the beginning and end of all things. The circle, another symbol of eternity, is repeated forty times in the Apse windows.

The side Apse windows mirror each other. They include a variety of symbols, as well as a chalice (signifying the Holy Eucharist), and a font (signifying Holy Baptism).

Located in the center of the eastern side of the Nave, this window depicts Elizabeth, the mother of John the Baptist. The story of Elizabeth is contained in the first chapter of St. Luke’s gospel. Her story parallels that of Mary (of whom she is called a cousin). Elizabeth’s son, John, baptizes Jesus.

The window was given in memory of Pamela McElroy, who was born in 1810 in Beverly, New Jersey, and passed away here in Canton in 1879. She is buried in Canton. 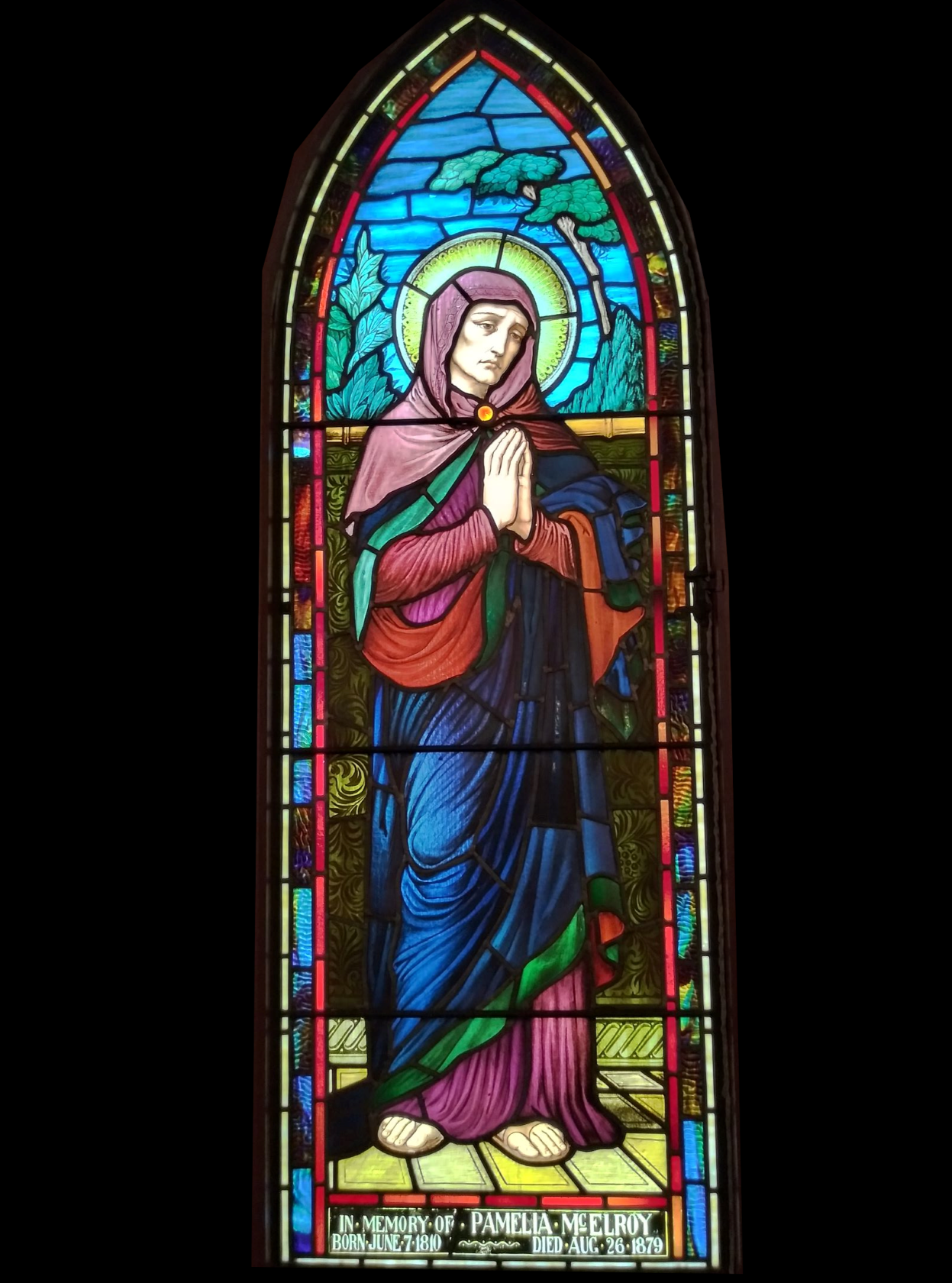 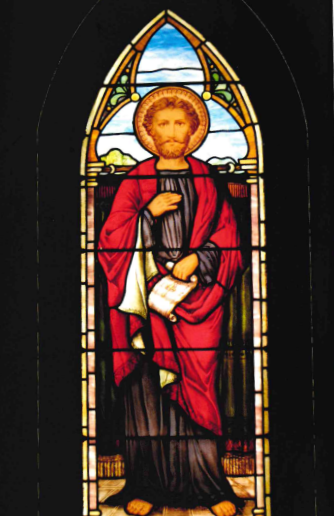 A stained glass window was given in 1896 in honor of Charles H. Blair by his wife. Born on July 16, 1834, he was Junior Warden of Trinity Church in 1885 when he paid the expenses for the interior decoration of the church.

The Blair family is listed in Trinity’s membership at its founding. Charles Blair was employed at the Collins Company in 1831, rising to the office of Superintendent by 1875 (Source: Bill Tribou research paper in Trinity’s records).

The window presents the figure of St. Matthew the Apostle. Matthew was called by Jesus from work as a tax collector to become a disciple. The scene in the window is framed by pillars, which are suggestive of a temple or marketplace. A conflicting record states this may actually be a figure of St. Mark the Apostle. This window depicts James, the Son of Zebedee, the third disciple called by Jesus. With his brother, John, he was part of the inner circle of the disciples which also included Simon Peter. All of them were fishermen, and in calling them, Jesus said that as his followers they would be “fishers of people.” The biblical quote inscribed in the window reads, “Be ye doers of the word…” The completion of that passage is found in the Letter of James (1:22) “…and not hearers only.”

This window was given in memory of James B. Lowell (1904-1974), who was born in Meriden, CT. In 1932 he started the Canton Public Golf Course, which was one of the first public golf courses in CT. He held many positions in public service at both the local and state level, most notably as a State Senator from 1952-1954.

St. Peter, the first disciple called out by Jesus, is depiced in this window. Peter is holding silver and gold keys, classic symbols of the kingdoms of the world and of the reign of God. The quotation at the base of the window is from the First Letter of Peter (2:5), “….and like living stones be yourselves built into a spiritual house,” with the rocks in the background reminiscent of this.

Mary Baldwin was born in Willimantic, graduated from the Grier School in Tyrone, PA, and from Connecticut College for Women in 1947. She was the daughter-in-law of two-time governor of CT, the Hon. Raymond E. Baldwin.

Jan R. Klinkert was born in the Netherlands where he began his career as a reporter for the Dutch News Service. He came to the U.S. to study at the University of California at Berkeley, from which he graduated in 1948. He worked for Holland Cheese Importers from 1951 to his death in 1965. He and his wife, Elizabeth Baldwin, had three children. 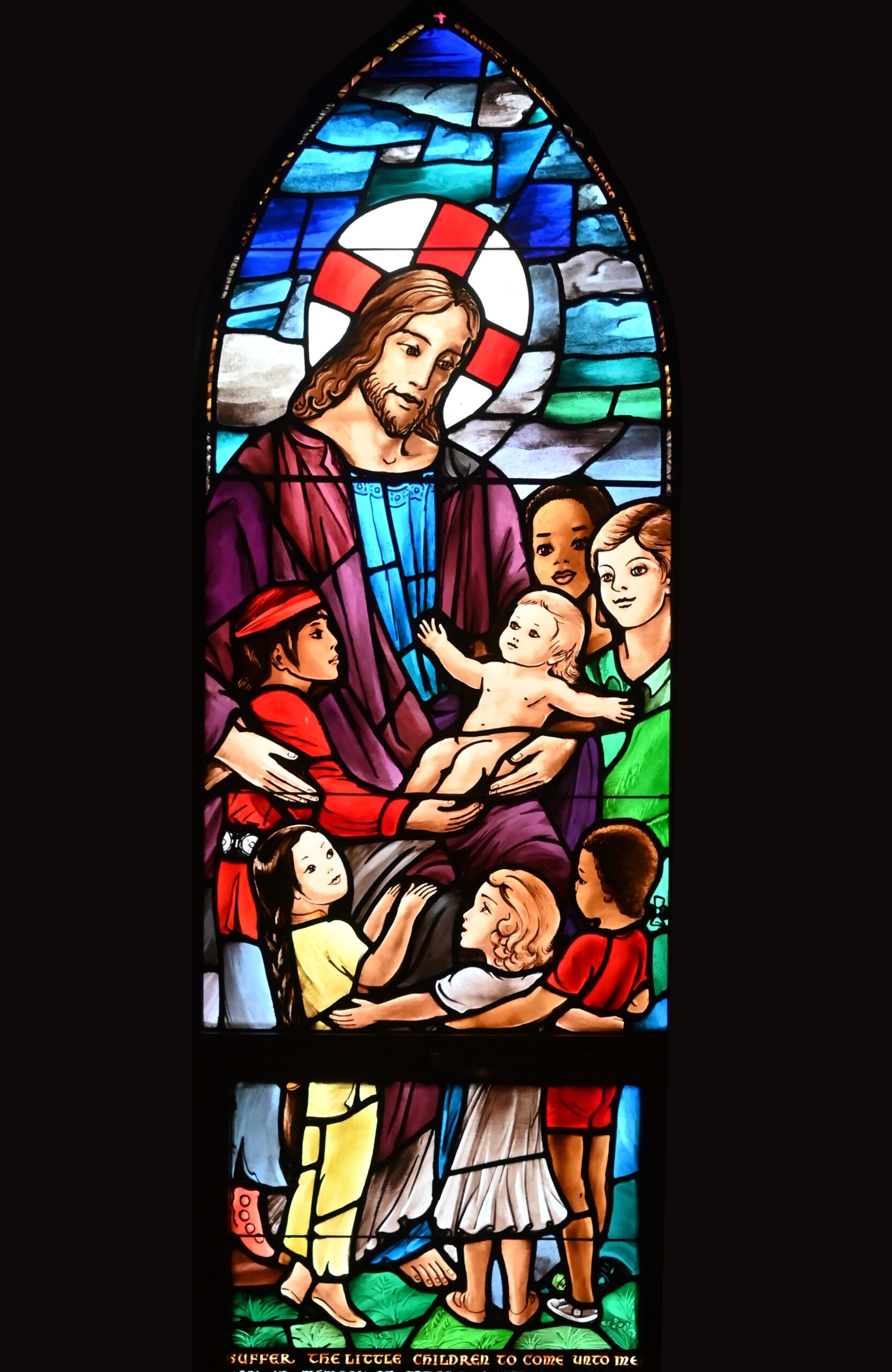 This window depicts Jesus encircled by many different children, a reminder that no matter where we are from, we are all God’s children and he loves us, every one.

This window was given by the Viering family in memory of Victor Viering (1892-1975) and Grace Viering (1891-1955), longtime members of Trinity Collinsville.

Victor lived his entire life in this area of Connecticut, while Grace was a transplant from Ballston Spa, New York. Victor was born in Burlington and was a graduate of Canton schools and Huntsinger Business College in Hartford. He  worked mainly in investments, eventually forming a partnership with four others. Victor served the Town of Canton as an auditor, member of the Board of Finance, and as president of the Collinsville Water Company for many years.

Long associated with music in the area, he also conducted the Farmington Valley Band for 60 years. Many past Viering family members were Trinity choir members. 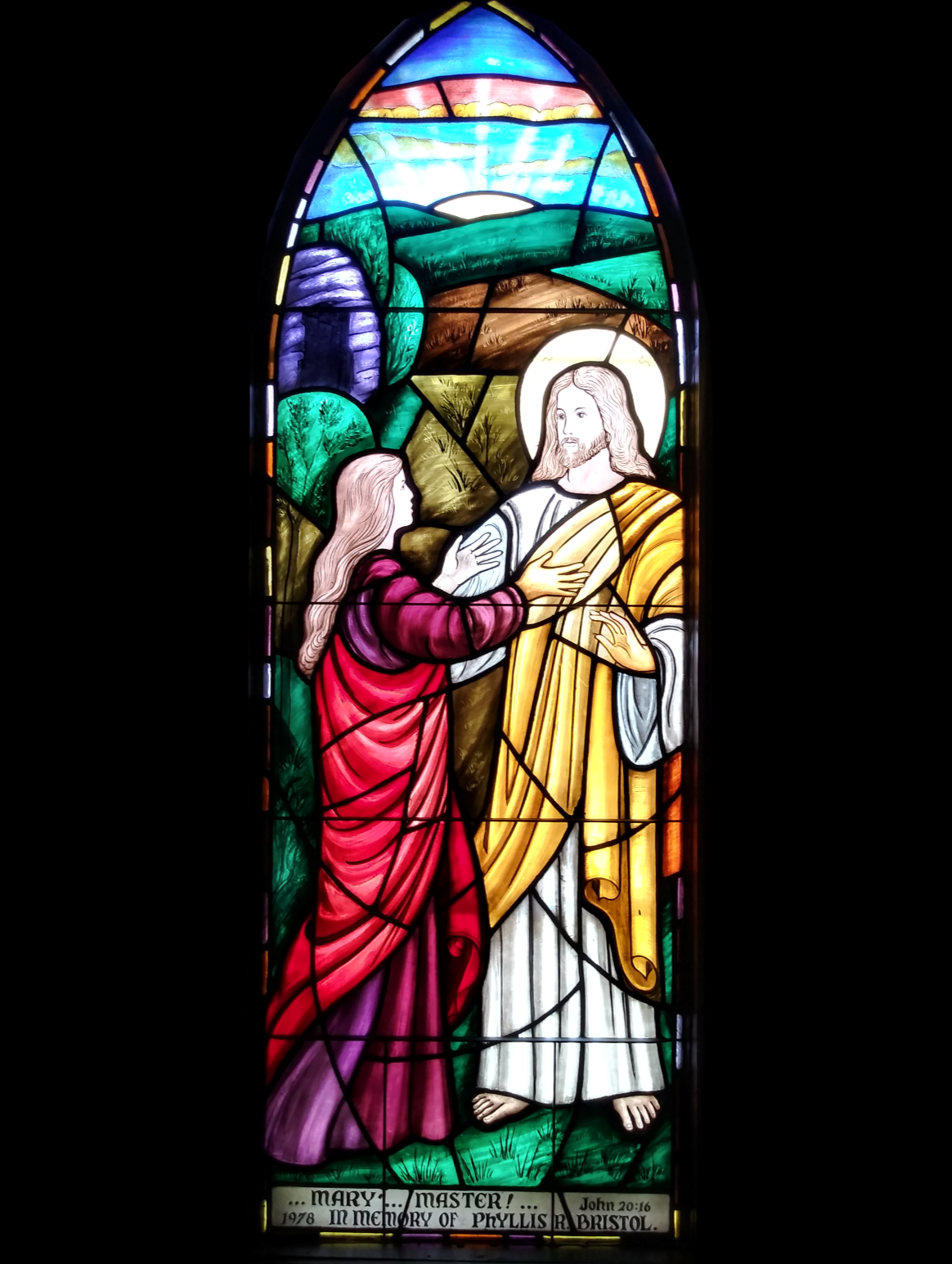 To the left of the organ at the back of the sanctuary is this window depicting the scene from John 20: 11-18, where Mary of Magdala meets the risen Christ. In the background is the empty tomb with the stone rolled away. The rising sun illuminates the far horizon, lighting the world with promise.

This window was given by Joan (Bristol) Finney and George Finney in memory of Phyllis Ruth Berry Bristol (1923-1977). Phyllis was born in Hartford and moved to Collinsville in 1943. A member ofTrinity Collinsville and president of its Women’s Club. Prior to her retirement in 1975, she was manager of the Hartford Children’s Museum Store. She was wife to Kenneth Bristol and had three children (Joan, Patricia, and Kenneth, Jr.).